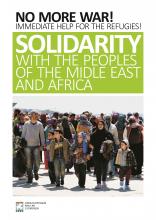 They are mostly people from countries destroyed and victims of aggressions, bombings, wars that the US government and its NATO and European Union allies promoted and continue to promote, under various pretexts, as is the case of Afghanistan, Iraq, Libya, Syria and other countries in the Middle East and Africa.

The Portuguese Council for Peace and Cooperation (CPPC) recalls the condemnation and denunciation it made concerning the successive interferences, aggressions and wars and their tragic consequences for the peoples of the States victims of these criminal acts, but also for people around the world, and reaffirms that the greatest humanitarian tragedy we are witnessing since World War II is a result of this aggressive policy that threatens world peace.

It must not be forgotten that, especially since 1999, with the war against the peoples of Yugoslavia, NATO has been used to implement the aggressive strategy of the US with the support and participation of its allies in the European Union, Turkey, Israel and some Arab monarchies. Since then, interferences, aggressions and wars have taken place, to ensure geo-strategic positions and guaranteeing easy access to raw materials and for the profitable arms business or in rebuilding of areas destroyed by wars.

The tragedy currently affecting more than 50 million refugees, including hundreds of thousands of families, children, women and the elderly is largely the result of these aggressive policies, which continue in Syria, Palestine, Yemen, Afghanistan, Iraq and many other countries, including Ukraine.

The CPPC once again denounces, those responsible for this tragedy, who now try to discard responsibilities, concealing the causes and exacerbating security measures against the refugees who need aid and refuge.

The CPPC calls on all peace-loving people to strive to denounce those responsible for the humanitarian tragedy that affects millions of refugees and in demanding compliance with the principles of the UN Charter and in Portugal, of the Constitution of the Portuguese Republic, to end interferences and wars of aggression, to support the countries in the Middle East and Africa under onslaught, to respect their sovereignty, for urgent assistance to their populations, ensuring decent living conditions, to channel funds used in the arms race, militarism and war to promote policies to aid the development of these countries, for peace.