The World Peace Council concluded successfully its anti-NATO actions in Brussels, as decided in its last World Assembly in Brazil last year, under the campaign “Yes to Peace-No to NATO”.

Several member and friendly organizations have organized or are planning to hold anti-NATO protests in their respective countries these days, in particular in the Czech Republic, Norway, Portugal, Italy, Greece, Cyprus, Canada, USA, amongst others.
The WPC participated in the INTAL (Belgian member of WPC) public event on 23rd May in Brussels, where amongst others spoke the President of WPC Socorro Gomes, the Executive Secretary WPC Iraklis Tsavdaridis, the member of the National Board of the Portuguese Council for Peace and Cooperation, Helena Quasqueiro, along with the coordinator of INTAL Veronique Coteur invited guests from Afghanistan and Syria.

On the 24th May the WPC held successfully its anti-NATO conference in Brussels, in which more than 80 people participated, representing 21 Organizations from 15 countries (Belgium, Brazil, Greece, Portugal, Cyprus, Turkey, Ireland, Nepal, Czech Republic, Serbia, Italy, Iran, Poland, USA and guests from Ukraine.)
The representatives of two International organizations, namely the International Association of Democratic Lawyers (IADL) with its General Secretary Jan Fermon and the World Federation of Democratic Youth (WFDY), with its representative Antigoni Kounoupi, took part and spoke in the conference.
In the WPC anti-NATO conference the President Socorro Gomes and the General Secretary Thanassis Pafilis held introductory speeches followed by all the other delegates of the conference. The opening welcome was made by Veronique Coteur from INTAL Belgium and the discussion was coordinated by the Executive Secretary WPC, Iraklis Tsavdaridis.

The conference and all the speakers emphasized the historical, criminal and reactionary character of NATO, as armed tool of imperialism, with a long list of interventions, coups, aggressions and wars. In particular the solidarity of the WPC to the peoples struggling for their just causes and their national sovereignty was expressed, with special attention to the peoples of Syria, Ukraine, to the Palestinian political prisoners on hunger strike and to the people of Venezuela and the peace movement in Turkey. The conference reaffirmed its demand for NATO’s dissolution on international level and the support to the struggle of the peace loving forces inside the NATO member States for the disengagement/withdrawal from NATO. It stressed the responsibilities of the governments of the NATO members which endorse unanimously NATO’s decisions and actions, in particular the goal for 2% of the GDP, in each member state, for military expenses.
Holding the anti-NATO conference in Brussels, which serves as Headquarters for two imperialist organisms -NATO and the EU-, the WPC underlined and denounced the close cooperation of them in all levels and to the detriment of the peoples.
All participants agreed that the enemy of peoples and of peace is NATO, without personalizing or reducing the struggle to one or another NATO leader.

The NATO summit ratified all decisions taken last year in Warsaw and paid special attention to the formal involvement of NATO “anti-terror” coalition led by the USA in Syria and Iraq, supposedly against the the “ISIS”, which was actually created, trained and used by the imperialist themselves. The summit of heads of states and governments decided to support the military operations in Syria and Iraq with Radar planes Awacs, which will use the US basis in Incirlik/Turkey and will be fueled in the air by special US planes, along with a center of coordination of the above operations. These decisions are additional to the already taken decisions on the deployment of NATO troops on a belt from the Baltic States till Bulgaria, with concrete distribution of forces amongst the member states. NATO is continuing its war drive policies with the installation of the “Missile Defense Shield” in Poland and Romania in order to secure the first strike option while avoiding any retaliation.

On 24th May afternoon and after its conference, the WPC took part in the anti-NATO rally (in which some thousands of people took part), which was organized by a coalition of Belgian Organizations, with a massive and militant block of WPC members and friends which was joined as well by foreign workers and migrants living in Belgium. The anti-NATO rally marched through the streets of the centre of Brussels for two hours, proceeded by a concentration at the North Station of the city.
The WPC organized its events in Brussels with its own resources and without and funding from any institution, government or foundation, as always.

The demonstration in Brussels can be seen in the following video: https://www.youtube.com/watch?v=2xyPa5eEIIo 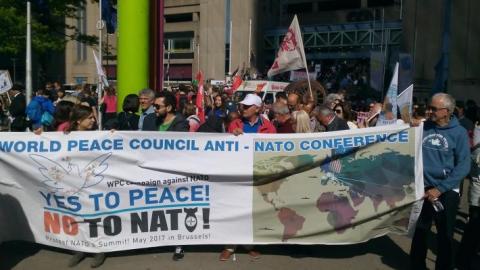 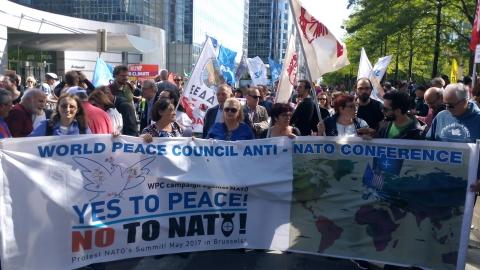 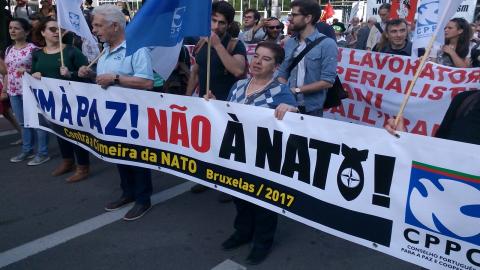 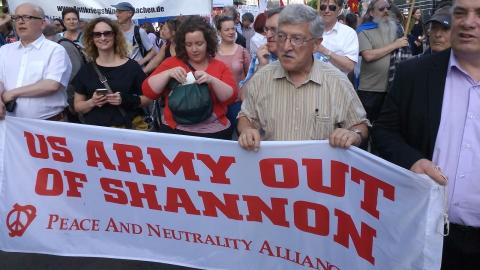 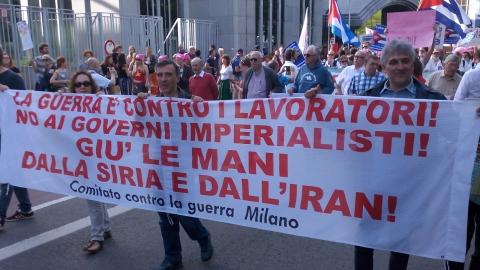 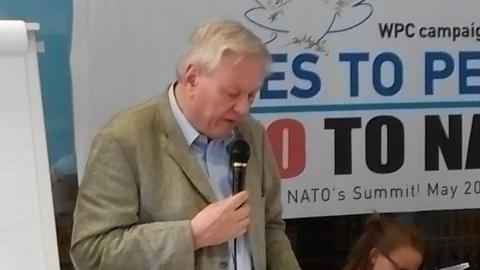 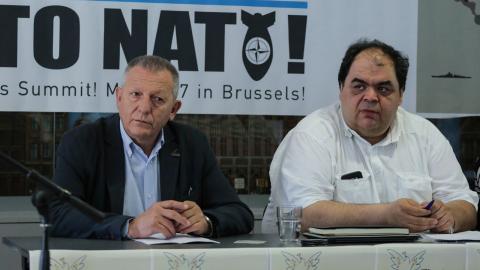 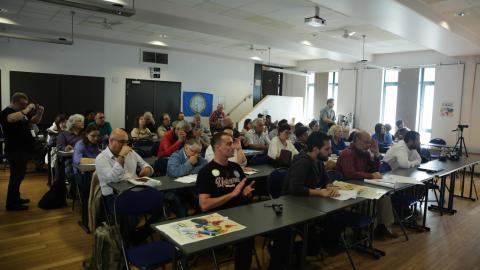 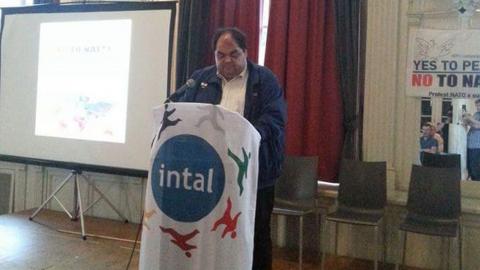 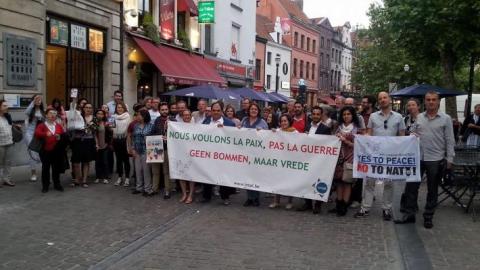